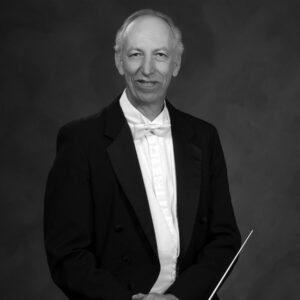 Dr. Atkinson founded the Western Colorado Chorale in 1985, and continued to serve as artistic and Music Director until his retirement in 2020 after finishing the 35th, 2019-2020 season.  In May 2008, he was invited to conduct the New England Symphony and the Festival Chorus in the performance of Sing Unto God, Wedding Anthem for Frederick, Prince of Wales (1936) by George Frideric Handel and Serenade to Music by Ralph Vaughn William at Carnegie Hall, in which a number of Western Colorado Chorale members performed. Dr. Atkinson, as guest conductor, and the Western Colorado Chorale, as guest artists, were featured in the January 2009 GJ Symphony Orchestra Program.  In the summer of 2017, Dr. Atkinson was invited once again to conduct at Carnegie Hall where members of the chorale also performed Jubilate Deo by Dan Forrest and The Song of Democracy by Howard Hanson.

Prior to his appointment at Colorado Mesa University, Dr. Atkinson served on the choral faculty at the University of Tennessee- Knoxville. He holds a Bachelor’s degree in choral music, piano, and strings from Utah State University. His graduate degrees, Masters in Choral Conducting and Doctorate of Musical Arts in Choral Music, were earned at the University of Illinois at Urbana-Champaign.  Dr. Atkinson has been honored as a distinguished high school choral director in Utah, received the Mesa State College Distinguished Faculty Award in 1999, and has served many years in leadership positions in the American Choral Directors Association.